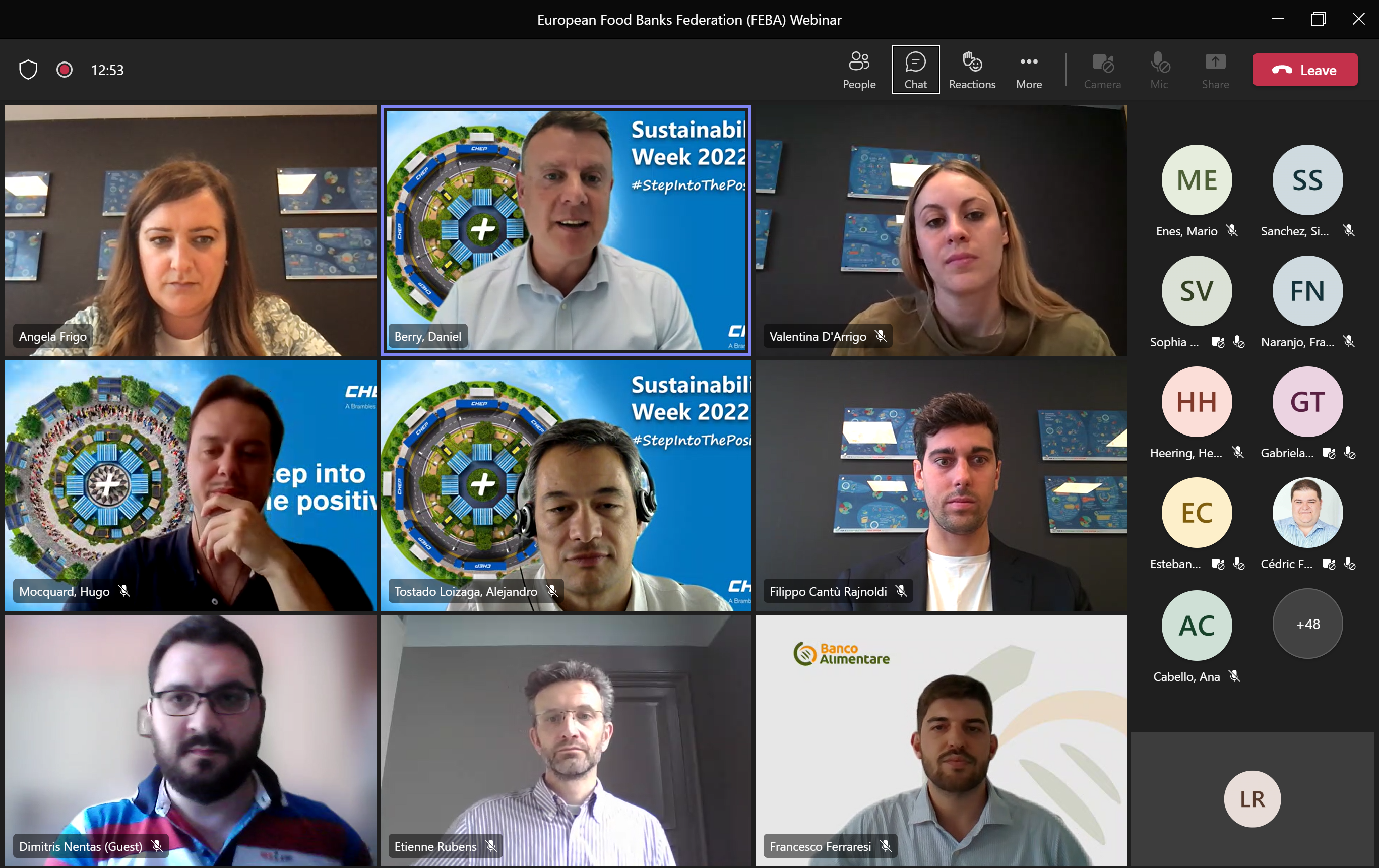 Brambles/CHEP and FEBA: the partnership continues

On 8 June 2022, the event was launched as part of the renewal of the partnership agreement between Brambles/CHEP and FEBA. More than 80 participants joined the meeting. The session was opened by Daniel Berry, Regional General Counsel, Europe, Turkey, Middle East, Africa and India, at Brambles who highlighted the importance of logistics and supply chain in food redistribution and Brambles’ commitment to supporting Food Banks  as part of its  sustainability strategy . In this way, Brambles can help communities while reinforcing the partnership with FEBA and its members all over Europe in order to make a difference for the people.

The floor was then taken over by Angela Frigo, FEBA Secretary General, who pointed out the future outlook of the partnership between FEBA and Brambles. She explained that FEBA and its members are committed to engage with Brambles and vice versa. FEBA circulated a survey aimed to assess the current collaboration with Brambles, collect the needs of members, and identify future joint actions. This partnership wants to contribute to the SDGs namely 2, which seeks to achieve food security and end or reduce hunger in all forms by 2030, and SDG Target 12.3, which calls for cutting in half per capita global food waste at the retail and consumer level and reducing food losses along production and supply chains (including post-harvest losses) by 2030.

The COVID-19 and the Ukraine crises have impacted FEBA and its members meaning an adaptation of the daily activities in order to respond to these crises. At the beginning of March FEBA launched the #AllTogether4Ukraine campaign to support the Food Banks helping the people of Ukraine. She pointed out that the FEBA- Brambles partnership dates to 2016 when the first collaboration agreement was signed. She emphasized that the partnership with Brambles is a 360-degree partnership including all types of cooperation, such as the sharing of expertise and knowledge, economic support, and volunteering activities to engage CHEP employees.  Many FEBA members already collaborate with CHEP but there are many members who are ready to start and follow these good examples. There are diverse types of collaboration in place ranging from the supply of blue pallets to economic donations and Logistics support. One of the main focuses is on logistic support like transport or warehouse management. Another focus is on volunteering during the annual national food collection as well as for warehouse activities. The objective of the 2022- 2025 Partnership agreement is therefore to increase and improve the collaboration on all levels.

Daniel Barry then took over and explained that Brambles aims to be the best partner possible for FEBA and its Members and is open to support more Food Banks and communities together.

This panel was then followed by 3 case studies to showcase existing best practices about the collaboration between Brambles and FEBA Members in Belgium, Greece, and Italy. The first case study was represented by the Fédération Belge des Banques Alimentaires/ Belgische Federatie van Voedselbanken who explained their collaboration with Brambles. Etienne Rubens, who is Project Coordinator & Procurement, pointed out the logistics process which involves many different sectors that donate food and how these food donations are then redistributed to the local Food Banks. In this process, the blue pallets by CHEP are very useful because they come free of charge and are picked up immediately at the local Food Banks after use. He summed up his presentation with a few recommendations and improvements for the collaboration between CHEP and Food Banks in Belgium.

In addition to that, Dimitris Nentas, Managing Director,  presented the collaboration of the Food Bank of Greece with Brambles. He pointed out that Brambles employees volunteer twice a year which is very helpful and Brambles also imported plastic pallet boxes specifically to Greece so that the Food Banks can use them.

The webinar was rounded up by the presentation of Francesco on the partnership between Fondazione Banco Alimentare ONLUS and Brambles which started in 2017. Brambles launched a tender among its transport providers on behalf of the Italian Food Bank to find the best quality/price offers for transport.
Thanks to this initiative, the Food Bank selected 10 transport providers which guarantee the same conditions offered to Brambles.

Here the benefits of the cooperation between the parties are clear, transport is crucial in the work of Food Banks and with the help of Brambles 20 transports per year could be organized. The transport network is therefore growing, and costs can be lowered through the cooperation.

Overall, this webinar highlighted the strong collaboration between – Brambles and FEBA, shows the commitment to the renewed partnership for the upcoming years and the potential for an even closer connection with the FEBA network