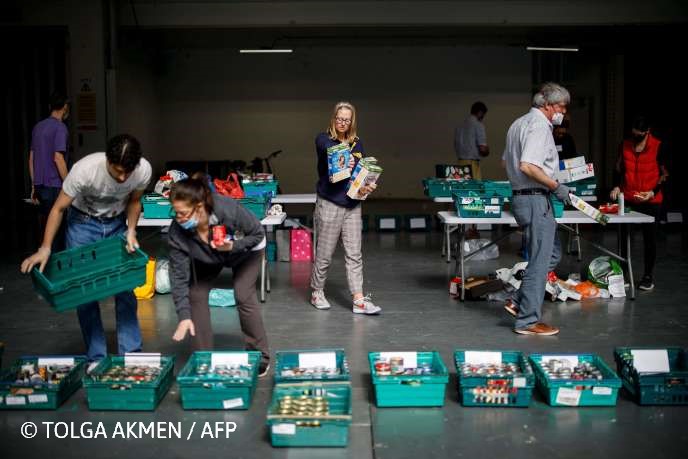 Europe is facing its new poor

The crisis is depriving thousands of citizens from the west of the continent. In the most affected countries, request for help food has increased from 25% to 30%.

For the first time since its creation in 1971, a team of Doctors Without Borders (MSF) works in the United Kingdom, another in Germany. Since April 11 in the British capital, eleven employees of the NGO, in partnership with a London university hospital, have been providing medical and logistics support for the homeless, who have become even more vulnerable with the Covid-19 pandemic. And this help now includes new populations that have lost their job – or a precarious job – with the closing of bars, restaurants and shops, and whose housing conditions and promiscuity have aggravated the contamination. “While it is very unusual for MSF to launch major activities in high income countries, it is completely normal that we bring emergency humanitarian aid where it is needed,” says Rosamund Southgate, medical coordinator for MSF in the UK.

The social and economic crisis takes over from the health crisis, and it is not sparing developed countries. Everywhere in Europe or in the USA, the sudden cessation of activities linked to containment have impoverished thousands of people. The gradual resumption of activity should provide only a very limited respite from the announced in tourism, entertainment or catering. Consequences: the lines get longer for the redistribution of food aid. Vouchers have appeared. And on the websites of charitable associations, calls for donations are more pressing.

“The social crisis is in front of us”

In a joint appeal launched at the end of April, the European Food Banks Federation (FEBA), Feeding America (FA) and The Global FoodBanking Network (GFN) declare to be engaged in a “massive struggle” to “feed an ever increasing number of families and individuals “, in a context that is more difficult because “the food distribution channels are disrupted by transport interruptions and quarantine measures. ”

“The social crisis is ahead of us and, from experience, we know it will last longer. While Eastern Europe seems a little bit more spared, in Italy, France, Spain, Belgium, the demand for aid has already increased from 20% to 25%. In the UK, it is even more difficult. Unemployment is rising everywhere” confirms Jacques Vandenschrik, President of FEBA, a network present in twenty-nine European countries. “Before, 30 million people were already in a situation of poverty in Europe. And we thought that figure would fall to 20 million in 2020… ”

In the city of Milan, the epicentre of the epidemic in Italy, eight food distribution hubs organized by a multitude of associations have been set up; in Barcelona and Madrid, Spain, the number of requests has tripled, 40% of which coming from people who had never used this type of help, according to Caritas Madrid; in the North-East of the country, on 6 May the newspaper El Periodico de Aragón reported that 24,000 people were helped in Zaragoza and throughout the region, a “figure which is constantly growing ”.

In France, “we are facing the same situation“, deplores the President of the Fédération Française des Banques Alimentaires, Jacques Bailet, who quotes one of the operations carried out at the end of April in a high school in Seine-Saint-Denis, during which “more than 600 beneficiaries received food aid in less than three hours ”.

“It is too early to fully understand the impact of the crisis on household income, but there has been a a huge increase in unemployment as a result of measures taken to slow the spread of Covid-19,” notes Irish MEP Maria Walsh (EPP, centre right). “According to the latest estimates, in April in Ireland we have moved from a modest unemployment rate of 5.4% to 28%.“

“Even if the Netherlands has never entered in a complete lockdown like Italy or Spain, the economy has also considerably slowed down,” testifies Dutch MEP Agnes Jongerius (S&D, centre left). “A lot of people with flexible contracts have been dismissed, freelancers have seen their activities reduced.  And even if the Dutch government has taken some measures, like for example the possibility of postponing the payment of certain taxes, a growing number of people in the Netherlands are forced to go to Food Banks. And that’s just the beginning. In some cities like Amsterdam, this increase is already at 30%.”

In London, the Olympia Center, a concert hall located in West Kensington, has made its premises available to distribute food parcels to 250 people per day on average. After a month of confinement, the Food Foundation in the United Kingdom released the chilling results from a study realized between April 24 and 29, according to which 5 million Britons with children under 18 were then in food insecurity, which double the level established by the Food Standards Agency in 2018. Among the 621,000 children who had access to free breakfasts before the crisis, only 136,000 were able to benefit from a substitute.

In association with the food distribution carried out in Geneva, Switzerland, by the association La Caravane de la solidarité, MSF came to the same conclusion on the basis of a questionnaire distributed in the long queues that were formed in front of the local Olympic ice rink requisitioned for the occasion. “40% of people had a job but with insufficient social rights,” reports Patrick Wieland, project manager at MSF Switzerland. “They are home helpers, housekeepers, restaurant workers whose small savings have melted away in a short period of time and who are falling into need.“

The consequences of isolation and cessation of activities have been even more violent because they have taken place in a tense context since the 2008 financial crisis. “We can’t say we were starting from scratch. Even before the pandemic, the European budget was already helping to feed 13 million people thanks to the Fund for European Aid to the Most Deprived [FEAD] “, says Jaume Duch, spokesperson of the European Parliament. The resources allocated to Member States by FEAD, created in 2014 and endowed with 3.8 billion euros, are today unanimously deemed insufficient.

“In Italy, according to recent data, we estimate that we will have an increase of nearly 1 million poor people, with a total of nearly 4 million people in situation of absolute poverty,” says the Italian MEP Elisabetta Gualmini (S&D). “The introduction of a form of minimum income as from 2016 had reduced the number of people in need before the pandemic, but today, the government is about to adopt additional emergency actions, in addition to the 80 billion euros already made available. Never in the Italian history of the last fifty years there has been such a financial intervention from the State.“

Despite the huge sums of money announced by governments in an attempt to stem the social and economic consequences of the pandemic, the situation is only getting worse.