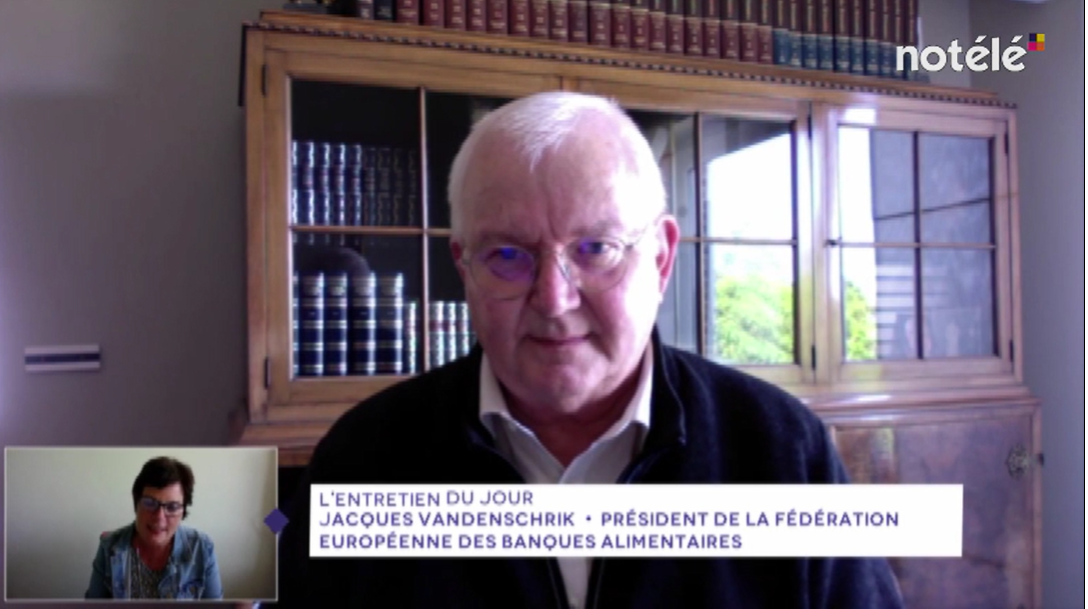 The virus of solidarity must kill the corona virus

Jacques Vandenschrik, President of the European Food Banks Federation, was interviewed by a Belgian local TV about the impact of COVID-19 on the work of Food Banks.

At what point is the precariousness threshold reached and a food parcel becomes essential?

When a family has paid all the bills and the money left is not enough to buy food. That’s when we speak about food insecurity. Asking for help, for food, is not easy and a lot of people in need don’t dare to ask. Due the pandemic and the lockdown measures, we have to take into account that some persons who had a good financial situation will now find themselves in a situation of food insecurity where they will have to choose between the quantity and the quality.

In Europe before the COVID-19 crisis, how many people were considered to be in poverty?

Before the pandemic, 30 million people in Europe were at risk of poverty.[1] The hope was to bring this number to 20 million in 2020,[2] but we are far from it. On the contrary, the number of people in a situation of poverty is increasing, due to the actual crisis.

The lockdown has had an impact on the food demand with an increase from 25 to 30%. Does this situation vary between European countries?

The situation is not the same depending on the country. In general, Eastern Europe has been less impacted than Italy, France, Spain, UK and Belgium. With the exception of Hungary and Bulgaria where the cost of food has increased significantly. In this case the factor of poverty is not the pandemic itself, but well the prices of food products.

In Brussels, the food demand in Food Banks has increased by 13% and the average for the entire country is 12,5%. In some regions, the demand has not increased at all, but we should be prepared for the next weeks and months. The experience of the 2008 crisis showed that the social crisis follows the economic crisis. We are now just entering the economic crisis which means that it will take months to evaluate the impact of the social crisis. But we can definitely foresee an increase in food demand that will be much more important that what we are experiencing at the moment.

Is receiving a food parcel much more than receiving food aid?

The food parcel is an opportunity to establish a social connexion with the person who needs help. We would never have this connexion if we just distribute credit cards to buy food in the shops. Giving food is a way to prevent food waste but it is also a way to improve social cohesion.

For the moment, two-thirds of our beneficiaries are single parent families. But we are expecting new profiles to come in the Food Banks in the next months. For example, families with two incomes where one parent has lost his/her job due to the pandemic could enter in a situation of poverty.

Are Food Banks able to cope with this increase of new demands?

There is an enormous solidarity movement which took place since the beginning of the health crisis. To give you an idea, the Belgian Federation of Food Banks has for the moment more than 800 pallets of products in stock. We have no problem in supplying the charities we are working with.

We see farmers who cannot find a way to sell their stocks of potatoes. At the same time, more and more people are asking for food help. How can we match both issues and avoid food waste and food insecurity?

Potato traders are already donating a lot of potatoes to the Belgian Food Banks. On top of that we receive fresh products from the auction. And we also collect products from the supermarkets. In the beginning of the crisis, surpluses in the shops were very low because of panic buying from the consumers. Now that the situation has calmed down, the Food Banks can again recover a lot of surplus food from the supermarkets. In 2019 the surplus food recovery in supermarkets represented almost 30% of the total amount of food for the Food Banks. The quality is very important, we receive meat and fish products that we can also freeze in order to extend their shelf-life.

Which changes States and Europe must put in place in order to face the challenges that are coming?

There is one virus that can kill the pandemic virus, and this is the solidarity virus. A more united society is necessary. At a European level, the European Food Banks Federation launched a Social Emergency Fund to help the Food Banks in Europe, and more than 4 million euros were already collected. We feel that there is a movement of solidarity.

The European institutions are focusing a lot on the economic relaunch. That’s good but we shouldn’t forget the material aid for the most deprived. And for that, we are waiting for financial decisions that are not taken yet. Measures have been taken for the Fund for European Aid to the Most Deprived (FEAD) but this is short term and we know that the crisis will last longer.

[2] The Europe 2020 strategy included a target to lift over 20 million people out of poverty.