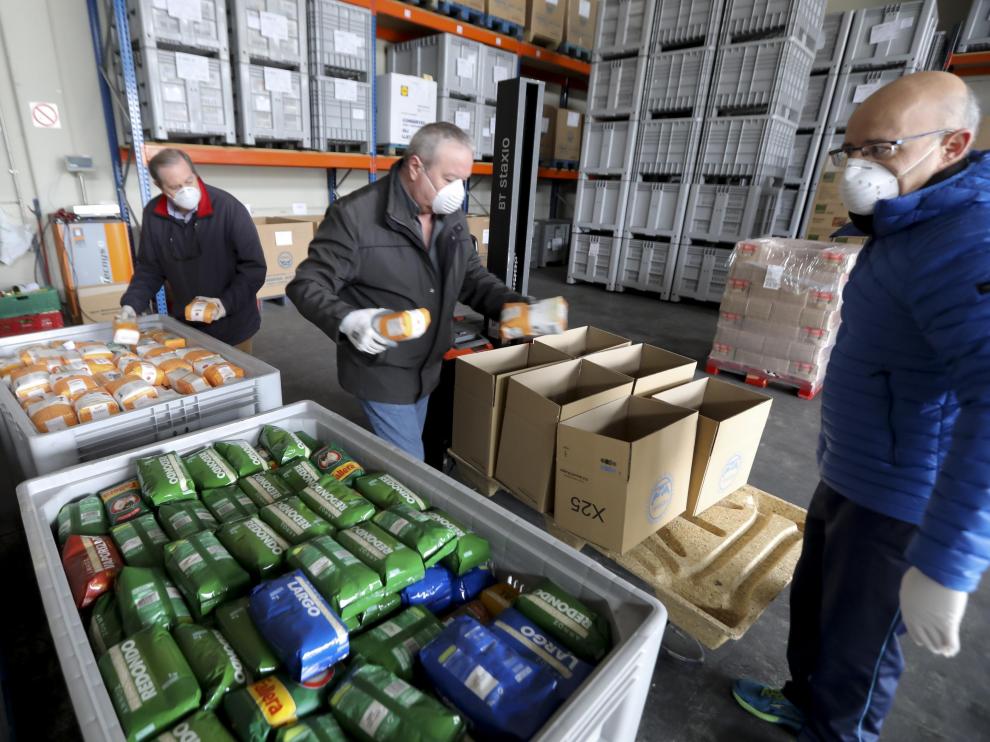 Updates from Spain during COVID-19 crisis

As many other countries, Spain has been impacted very hard by the coronavirus pandemic. The Spanish Food Banks, under the Federación Española de Bancos de Alimentos (FESBAL), remain open and many initiatives have been taken in order to respond to the social emergency that the pandemic is causing for a lot of people in Spain. Find out updates on the work of the Spanish Food Banks below.

In response to the current complicated context, ELLE magazine has launched ELLE SolidArty, a campaign supported by the journalist Sara Carbonero and singer Rosalía.

Under the hashtag #ELLE4Food, ELLE inaugurates on 19 June a virtual art gallery, led by CaixaBank and Amazon, which gathers limited edition images donated by photographers and characters, as well as sketches and drawings of the best fashion designers and illustrators, and works of art.

For each acquisition in the gallery, the equivalent of a shopping basket will be donated to the Spanish Food Banks.

The supermarket chain successfully organized “Lidl’s Great Challenge”, a solidarity campaign to support the Spanish Food Banks. The goal was to collect 100,000kg of food, from which 50,000 kg were donated by the company itself. However, thanks to the solidarity of its customers, the donation has increased 500,000 kg of food.

Bimbo, one of the largest organizations in the Spanish food sector, showed its solidarity with the most vulnerable in the current economic context by donating 160,000 packs of bread slices to FESBAL. This donation is part of the #BimboContigo initiative, which includes numerous actions aimed at families, vulnerable groups, professionals working in the fight against COVID-19, and the company’s own collaborators. Read the full news (in Spanish) here.

The Garrigues Law Firm has launched a solidarity campaign among its employees around the world in order to help the most vulnerable people who have been hit hardest by the COVID-19 crisis. The campaign covers 13 countries where the firm is present. Garrigues will complete his team’s donations with his own. In Spain, the funds will go to FESBAL, the Spanish Federation of Food Banks.

The collaboration between Garrigues and FESBAL lasts since 2012. Year after year, the office has provided donations or pro bono services to the Food Banks in Spain. FESBAL even awarded Garrigues with the Prize for continued cooperation within the framework of the “Espiga de Oro” Awards. Read the original article here (in Spanish).

In collaboration with FESBAL and in line with the rules that govern the new normality, the El Corte Inglés Group is inviting its customers to make a financial contribution that will result in a delivery of products to the Food Bank.

Everyone can make a contribution in the cash line of the supermarkets of El Corte Inglés, being able to choose between 1, 3, 5, 10, 25 or 50 euros, or provide the quantity they want. In this way, each Food Bank will be able to acquire the most demanded products at all times by the neediest families. With this initiative, logistics activity is minimized, avoiding the consequent carbon footprint of the transfer of physical products, as well as the necessary handling of food.

In addition, El Corte Inglés has called on its employees to volunteer during this initiative. They will inform customers about the operation and the basic necessities that are most needed by the Food Banks .Read the original article here.

Updates from 10 June 2020: El Corte Inglés donated more than 910,000 euros to the Spanish  Food Banks thanks to the “Operation Virtual Kilo”. This amount comes from donations (from customers and employees), from the sale of solidarity cards and from the contribution made by El Corte Inglés equivalent to 10% of the total collected. The money will make it possible to provide all the necessary food to a total of 5,560 families to make their daily meals for one month. Read the press release (in Spanish) here.

The Cepsa Foundation, in order to help in the fight against the most pressing effects of the pandemic, has responded to the urgent request launched by the Spanish Federation of Food Banks for purchasing and distributing basic food stuff among the most disadvantaged groups. The Foundation will donate € 200,000, which will allow the purchase of 300,000 kilos of basic products. Read more here.

In recent weeks, FESBAL has also started a campaign to donate and collect essential goods. Danone wanted to join this appeal by supporting the needs for purchasing food and EPI materials, which are essential to guarantee the operational capacity of the Food Banks. In addition to that, the company will reinforce the product donations it currently makes, and will make 1 million yogurts a month available to social entities. Read more here.

Updates from 8 June 2020: Mid-April, Danone launched the crowdfunding campaign “Querer el Doble”, as part of the “Alimentar por Amor” social action program. The campaign was in favor of the Spanish Food Banks, and for every euro raised through the crowdfunding platform, Danone contributed another. In a month, Danone managed to raise more than € 120,000. Thanks to this money, more than 6,000 families will receive basic food items through FESBAL. Read the full news (in Spanish) here.

Moreover, to respond to the current social emergency Spain is facing, the Fundación Reina Sofía will allocate to the Spanish Federation of Food Banks an extraordinary economic donation destined to the urgent purchase of 265,000 liters of milk to distribute among the associated Food Banks in Spain. Read more here.

Finally, in response to the coronavirus emergency, Pastas Gallo will make the donation generated by the one-day production of all its plants, in Córdoba and Barcelona. There will be 150 tons of Gallo products that will be delivered to Food Banks throughout the country in order to cover the needs. Read more here.

FESBAL reports to the monarchs – 9 April 202

0On Tuesday 7 April, the King and Queen held a video conference with the heads of FESBAL, who conveyed to the monarchs their concern about the current situation caused by COVID-19 and its consequences. According to their estimates, up to 1.5 million people could depend on Food Banks for food in the near future. Read more here.